Lockhart River was established in 1924 when people from of the KuukuYa’u, Wuthathi, Umpila, Kaanju and Uuthalganu clans were coerced into a new Anglican mission at Orchid Point. The mission was moved in 1925 to Bare Hill (putchiwu’chi) which had better water supply and potential to grow limited crops.

Our people were sandbeach people (Pama Malnkana = people of the beach). Under the rules of the new mission we were not allowed to speak our language or to practise our cultural traditions and were moved inland a little bit away from our sea country. Marked by the good intentions but often misguided policies of successive governments and missionaries, against all odds we managed to keep our unique culture alive and strong.

The first European contact with Lockhart River was by William Bligh in 1789. Most people know of the infamous ‘Mutiny on the Bounty’, but many do not realise that after being cast adrift on the ship’s launch after the ship was seized by Fletcher Christian and mutinous crew, Captain Bligh spent time recuperating on Restoration Island, in Kuuku Ya’u country at the northern end of Chillie Beach.

Explorer Edmund Kennedy passed through the traditional lands in 1848, swinging westward across the hills to the upper Pascoe River, in the first European attempt to survey the interior and peninsula of this part of Australia. He left a base party of eight on the Pascoe River, six of whom starved to death after refusing fish and other food from the Kuuku Ya’u people.

No further land exploration took place until William Hann came across from the Holroyd River in 1872, passing just south of the present town of Coen. The Lockhart River was named during an exploratory expedition by government geologist Robert Logan Jack in 1880 after a friend of his, Hugh Lockhart, of Edinburgh. The Claudie River was named by Jack’s travelling companion, prospector Billy Lakeland.

From the 1880s, sailors enlisted and often kidnapped individuals and family groups to dive for beche-de-mer and pearl shell. Some of the lugger captains paid the divers in tobacco or as little as $1.50 a month and Aboriginal labour on luggers was later prohibited due to the on-going abuse of our people.

Early last century, Orchid Point on Lloyd Bay was a centre for the trade of sandalwood. A base camp for gathering sandalwood was set up by Hugh Giblet in 1907. Giblet recruited Aboriginal workers to gather sandalwood, protected them from unscrupulous lugger captains and rewarded them with food, clothing and cased liquor at the end of season Christmas party. Giblet died in late 1923. According to oral accounts, his death was caused by an infection from a woomera blow, which broke his jaw during one of his famous Christmas parties. Our people rowed him down to Port Stewart to get medical help but he died on the way and is buried there. Giblet is remembered fondly as someone who worked with our people and respected culture. Such was his trust that he went and fought in WW1 leaving his plant of pack horses, luggers and a 25 ton ketch under the command of our people while he fought. The business thrived in his absence.

In 1906, Chief Protector of Aboriginals, RB Howard, recommended an Aboriginal settlement be established at Lloyd Bay. He wrote glowingly of the ‘fine stamp of people – strong, healthy, active fellows who seemed delighted at the idea of a settlement being formed in their own country’.

In 1910, Howard noted sandalwood prices were falling and the Aborigines of the region would ‘keenly feel hardship’ when employment ceased. He also pointed to problems relating to the supply of intoxicating liquor to the Lockhart Aborigines and referred to the ‘urgent necessity of at once placing an officer of this Department at the Pascoe or Claudie River to see that the provisions of the Aboriginals Protection Act are not evaded’. Our people worked with Giblet to frustrate the attempts of state and church to start a mission which didn’t commence until after his death. Until the mission started we were still free to live our traditional way.

A Mission Is Formed

Bishop Newton asked the Government to plan the set up a mission on the Pascoe River reserve. However, as the proposed mission was on a mineral belt, Bishop Davies (who replaced Bishop Newton) requested a change of site and the government agreed to transfer the reserve to the Lockhart River region where there were no leases.

Harry Rowan was appointed Lay Missionary and Superintendent and arrived in July 1924 at Waterhole (Orchid Point) in Lloyd Bay, on the site of Giblet’s old camp. The mission was moved in 1925 to Bare Hill which had better long term prospects.

This was a difficult time when people were denied freedom of movement to access their country and were forced to live permanently with comparative strangers and, in some cases, enemies.

By January 1925, Rowan reported more than 80 Aborigines at the mission. High infant mortality in the previous decade meant the number of children was small, but a school was started by the end of 1925. In 1928, a church was under construction and cutting sandalwood was still the main income for the mission.

During the early 1930s, Rowan tried cotton, bananas, pawpaws, cassava, sweet potatoes and taro. A new launch was obtained so fish, dugong and turtle as well as garden produce sustained the mission.

An Act passed in 1934 that gave the Queensland Government the right to move Aborigines at will. People of the Flinders Islands area of Princess Charlotte Bay were brought to Lockhart. By 1936 only a few Aborigines in the north-eastern area remained in traditional lands. That same year, 80 older Aborigines were removed from the Coen, Port Stewart, and Batavia districts to the mission. In 1937, the mission had a population of 388 but 35 lives were claimed by whooping cough in 1938.

Locals tell how during the Second World War, all outsiders left to travel south and Aboriginal people were advised to ‘go bush’ to escape air raids.

Although times were still difficult, people re-established connection with their ngaachi (place/land/estates) and spread out like before.

The mission was re-established in 1947, with H Johnson as Superintendent. To try to establish community spirit, Johnson changed the structure from a series of sub-villages (representing tribal grouping) to a single settlement. He saw it as a necessary step in the ‘breaking down of old tribal enmity and establishment of community spirit’.

Small scale trochus fishing and other commercial activities were established. Johnson encouraged traditional skills such as language, bushcraft and hunting. Hunting was important because the funding to run the mission was well below subsistence. His successor, Briggs, noted the ‘complete absence of vindictiveness or arrogance’ in the Lockhart Aborigines, whose spiritual qualities were ‘outstanding’. Briggs resigned in 1950 and was succeeded by John Warby, whose name is commemorated in an era of Lockhart history as ‘Warby time’.

Lockhart by now was in a desperate situation. Author Kylie Tennant described it as an ‘insanitary and poverty-stricken little pesthole’ and ‘the worst mission of them all’. Warby re-organised the housing to bring people closer to the sea. Not only could our people live alongside the sea but in homes they had built together out of local materials.

In 1953, Warby reported all people living in Lockhart had embraced Christianity.

Coluding with the reverend Alf Clint and with the belated endorsement of the Anglican Board of Missions, Warby established the Lockhart River Christian Cooperative. Among other things, it aimed to teach people to run their own cooperative business, provide employment, establish a voluntary night school, improve living conditions and foster church activities. For the first time, mission residents were allowed to participate in decision making and play a role in routine administration. Each family was a shareholder.

Through the Co-op, trochus fishing expanded to be the major economic enterprise with three boats up to 25 ton. By 1956, the Cooperative was on such a sound basis it donated 2000 punds to the Diosis. Warby reported it was building up initiative, self-respect and self-reliance backed by a dramatically improved health situation. But with changes to plastics technology, the trochus market collapsed. This had a profound impact on the Mission not just its finances. Staff shortages were critical. Warby left in 1959 and his successor JT Currie found it necessary to close the Lockhart River Christian Cooperative in 1961. The reality was the Mission could not function on the financial stipend of 750 pounds per year and struggled in spite of the best efforts of all.

Financial difficulties and the failure to find permanent church workers led to the church relinquishing its control of the mission. In the early 1960s, the Anglican Bishop of Carpentaria secretly negotiated with the Director of Native Affairs, Pat Killoran, to transfer Lockhart River to the state.

In 1964, the Anglican Church handed over the mission to the Queensland Government, who tried to relocate the people to Bamaga. Unlike the people of Mapoon and Port Stewart who were tricked, our leaders stood up to the government and refused to go but, in 1970, agreed to move to a place closer to the airport and the supply port of Portland Roads at Iron Range. This move had its problems. It took the settlement from one reasonably neutral location to one owned by a major group in the community and from living right on the coast to further inland. Friction resulted and continued.

With the advent of the Qld Community Services Act 1984, on 30 March 1985, the Lockhart River community elected five councillors to constitute an autonomous Lockhart River Aboriginal Council. In a then ground-breaking recognition of Aboriginal land rights, the council area, previously an Aboriginal reserve held by the Queensland Government, was transferred on October 29, 1987 to the trusteeship of the council under a Deed of Grant in Trust (DOGIT). Locally elected councillors now held a legal right to lead our community as a local government and hold the land for our people under the DOGIT arrangements.

In September 2001, the majority of the land held by Council under the Deed of Grant in Trust, was handed over to Traditional Owners under the Queensland Aboriginal Land Act. The Mangkuma [mung-Kooma] Land Trust was formed and holds the land on behalf of the Traditional Owners.

A successful Native Title determination for an area north of Lockhart River was ruled in favour of the KuukuYa’u [Koo-kooYaoo] people by the Federal Court of Australia in 2009. The Mangkuma Land Trust area is part of the current CY “one claim” for Native Title being administered by the Cape York Land Council.

Our culture has survived in spite of the attempts to spoil it by various missionaries and government organisations. We had to keep a lot of things hidden to avoid trouble back then. Support and respect for our cultural life took place in the 1970s with a number of dance festivals and traditional activities. Few people realise Lockhart River was the birthplace of the dance festival which later moved to Laura where it became the longest continuous cultural festival in Australia. Today, Lockhart River dancers still perform regularly at festivals including the Laura Aboriginal Dance Festival.

The community would dearly love to see a return of the dance festival to the place where it began some 40 years ago.

The community’s strong cultural identity – as expressed through its dancers and also internationally-renowned Lockhart River Art Gang – makes Lockhart River a natural place to come together to celebrate the proud cultural heritage of Cape York.

Our continued access to our country and the development of our outstations helps keep our culture strong and our relationship with our Ngaarchi straight. 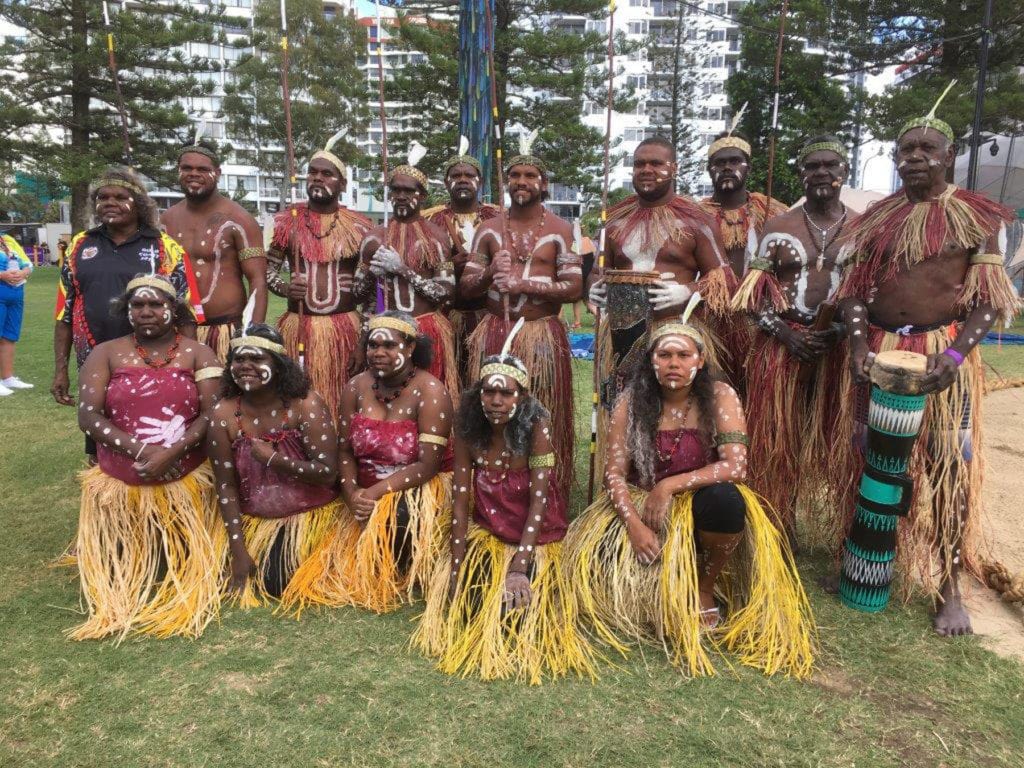 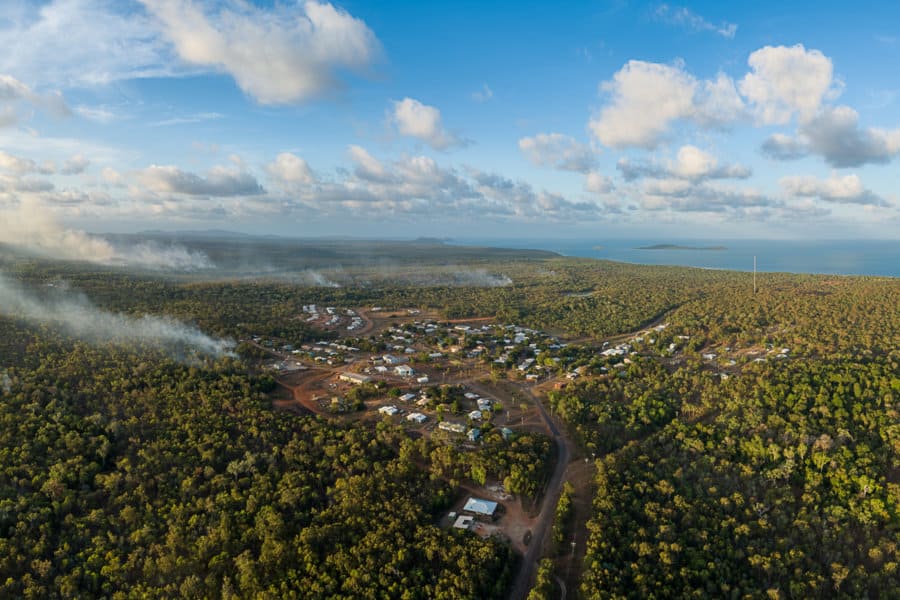 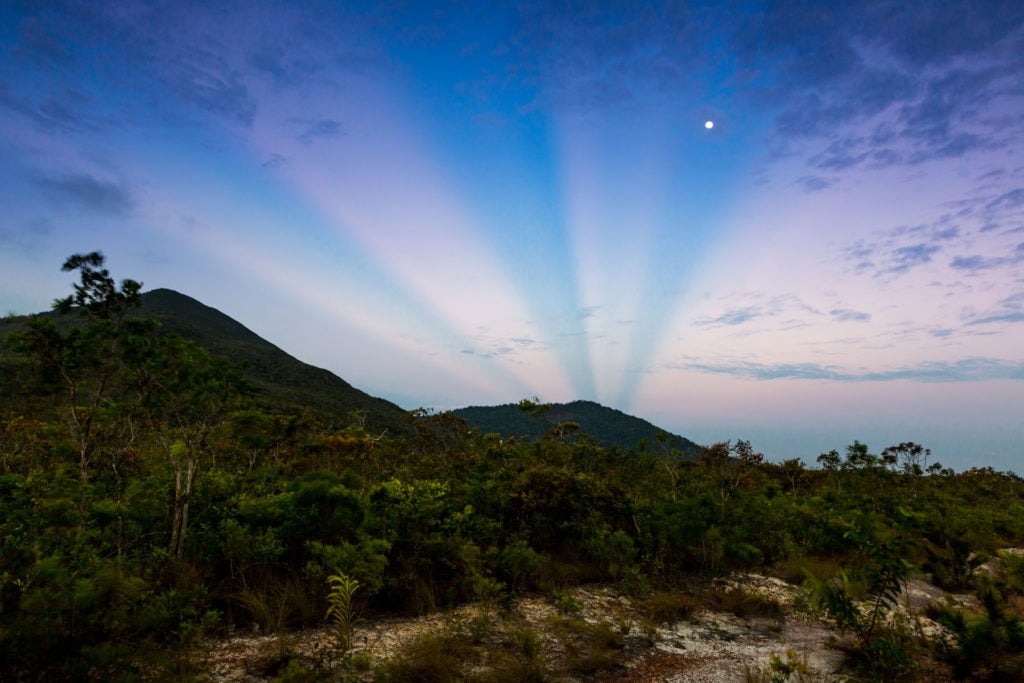 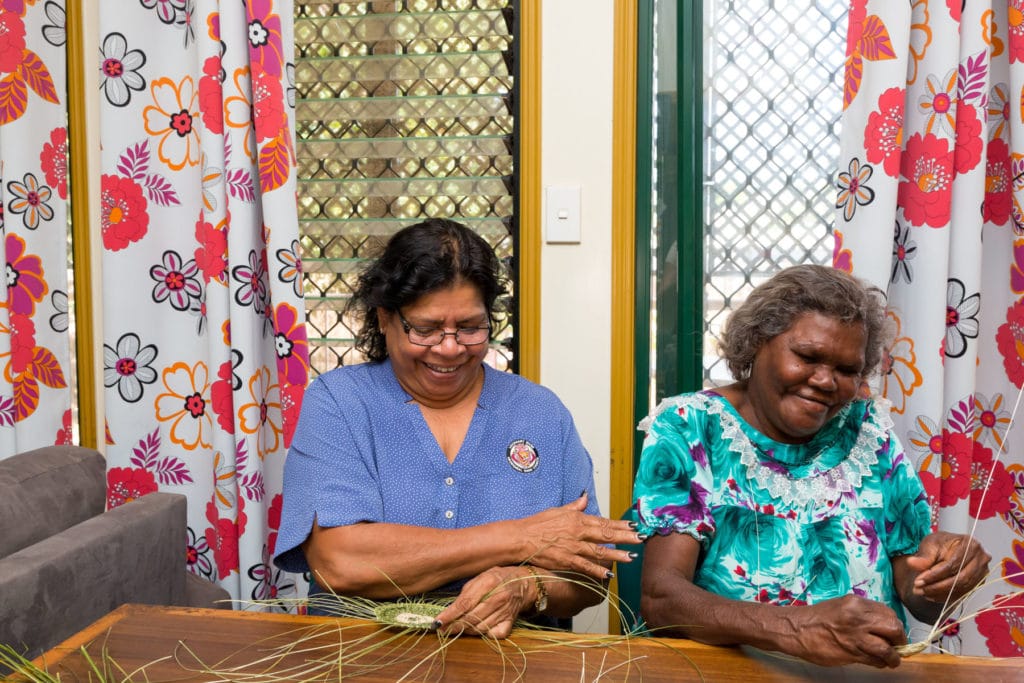 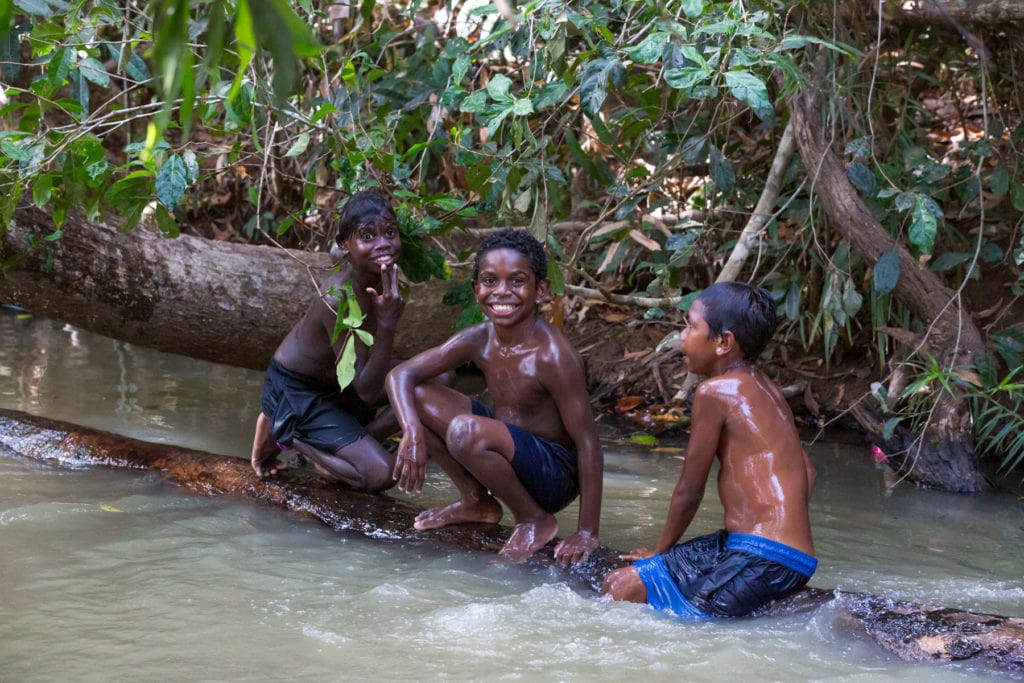 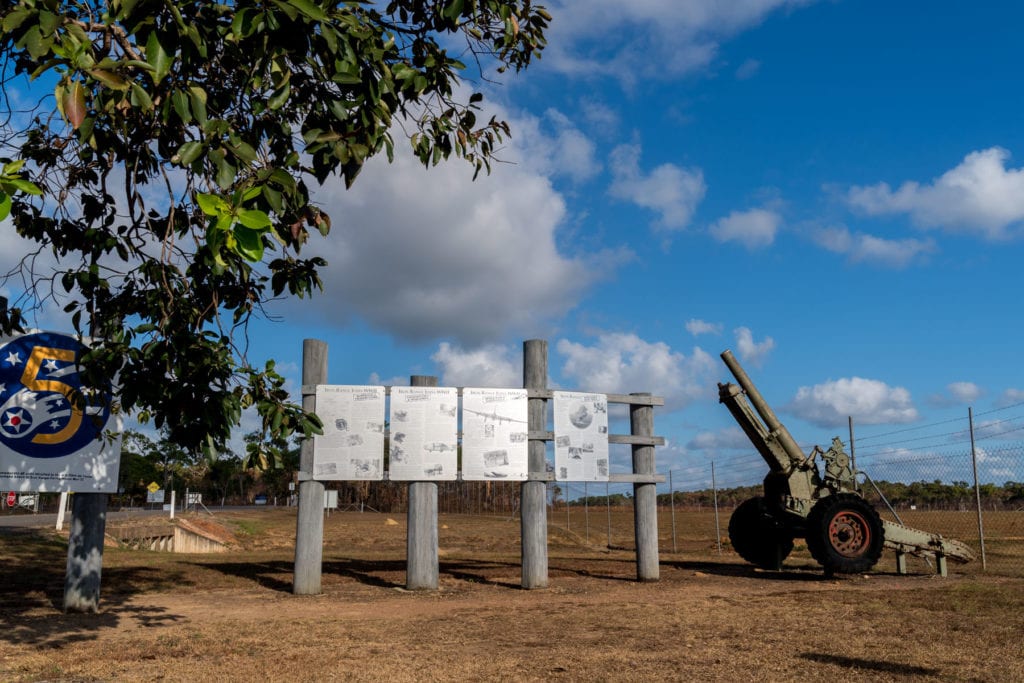 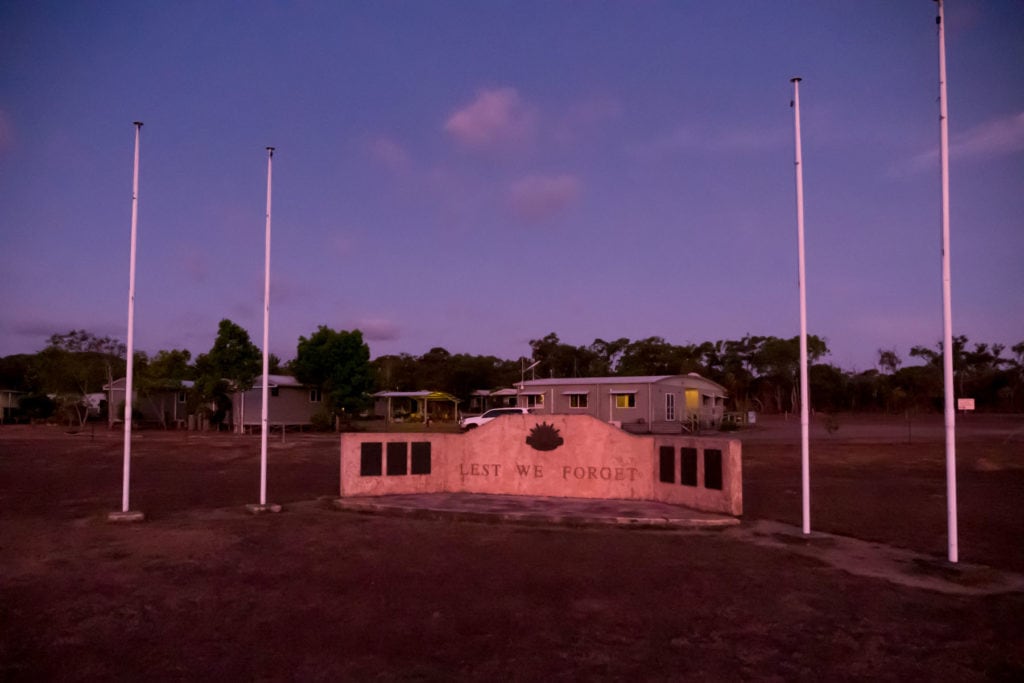 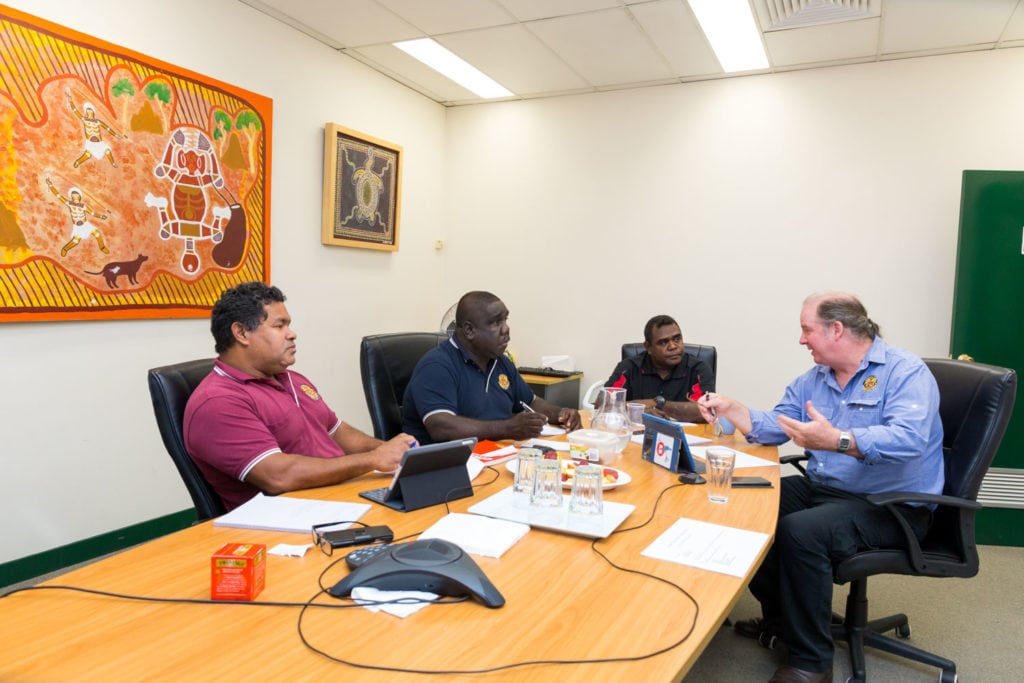 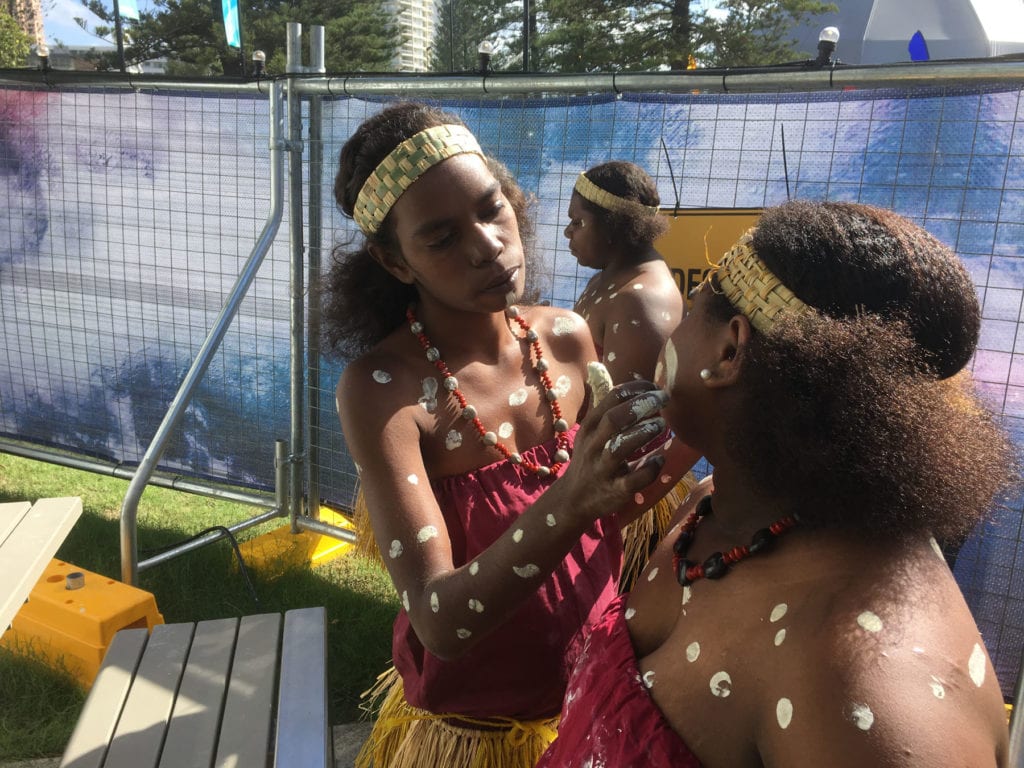 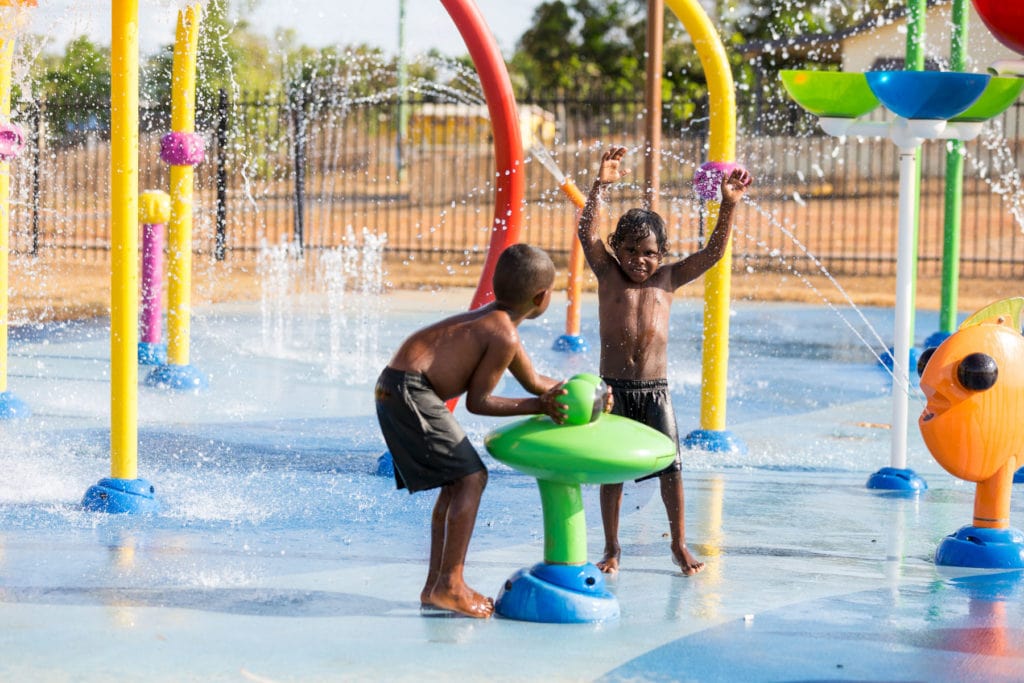